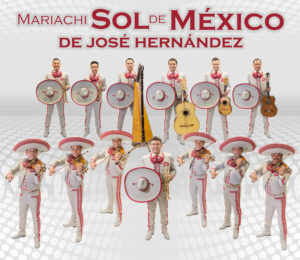 WHAT:           Mariachi master José Hernandez and his world-renowned Mariachi Sol de México will appear in concert at the Mariachi Spectacular in Albuquerque, New Mexico. The internationally-acclaimed mariachi has performed at the festival since its inception and Maestro José Hernández was Music Director of the festival for its first 20 years and inducted into the festival’s Hall of Fame in 2016. The ensemble will delight audiences with a program of memorable mariachi favorites from six legends of Mexican music from their new CD Leyendas de mi Pueblo. Tickets 800-745-3000 or click here to buy online.

José continues to advance the art of mariachi music with daring new compositions and arrangements. His latest and sixteenth CD, Leyendas de miPueblowill be released in June. It is an homage to the great Mexican Mariachi music icons Jorge Negrete, Pedro Infante, Jose Alfredo Jimenez, Miguel Aceves Mejía, Javier Solís and Vicente Fernandez. He has composed, arranged and provided music for all sixteen Mariachi Sol de México albums. He sings and plays trumpet, violin, guitarrón, and vihuela. He has performed in prestigious venues around the world and recorded with some of the most respected names in the music industry including Selena, Vicente Fernandez, Lola Beltrán, Juan Gabriel, Luis Miguel, Bryan Adams and the Beach Boys.