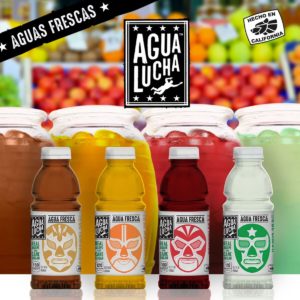 AguaLucha is the brainchild of two L.A. entrepreneurs who grew up enjoying aguas frescas in Mexico but could not find the right stuff in the U.S. AguaLucha was named in honor of the founders’ luchador family roots.  Their Tío Chucho was a Mexican luchador during the 1940’s whose wrestling name was “El Mechudo” (Wild Hair). Tío Chucho and his wife Tía Tórtola were great friends of legendary Lucha Libreicon El Santo.  As part of their mission, AguaLucha  helps retired luchadores via its apoyoaluchadores.org foundation to which it donates a portion of its sales.

Lucha Libre is the quintessential symbol of the Mexican people and their culture. Mexicans are real life luchadores who confront life’s challenges with grit and strength. AguaLucha’s tag line: Aguas frescas para luchadores auténticosmeans AguaLucha is for those real luchadores de la vidawho go out each day and win at life.

AguaLucha’s mission is to provide consumers with enjoyment by experiencing the best and most authentic high quality beverages that honor, celebrate, and promote the rich Mexican cultural tradition. AguaLucha brings fun to Mexicans and non-Mexicans alike. The AguaLucha brand also seeks to support and encourage Hispanic Americans to gain skills, experience, and confidence to feel very secure and succeed in the United States. ¡A huevo!The company also creates and sells apparel and accessories branded with their fun and edgy lucha libre-inspired imagery.  All products are available at their online shop.

AguaLucha began selling a aguas frescasin early 2017 and has quickly grown its distribution in top California markets like Los Angeles, San Diego and The Bay Area. The company plans to expand its distribution in Texas, Chicago and New York. AguaLucha has two delivery trucks: “En Homenaje al Santo” (In Homage to El Santo, driven by Andy “El Peregrino” (The Pilgrim) and “En Homenaje al Huracán Ramirez” (driven by Eric “El Terrible”). AguaLucha’s customers include some of the most sought after food establishments in Southern California.