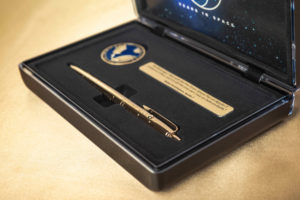 Fisher Space Pen Co., a family-owned company manufacturing Made in America products, celebrates the 50thAnniversary of the maiden flight of its iconic AG7 Original Astronaut Space Pen aboard NASA’s Apollo 7 Mission on October 11, 1968. The company was recently featured on ABC World News Tonight with David Muir’s “Made in America” series. Watch video.

To commemorate this historic occasion, Fisher Space Pen is issuing a Limited Edition – AG7 Original Astronaut Space Pen and Coin Set. The pen’s barrel is made of brass with gold titanium nitride plating and an engraved design featuring a constellation and the Apollo 7 capsule. The set is accompanied by a beautifully-designed coin featuring the Apollo 7 capsule on one side and the Fisher Space Pen “50” logo on the other. The set is complemented by a plaque engraved with a quote from Walter Cunningham, Lunar Module Pilot on the Apollo 7 Mission: “50 years ago, I flew with the first flown Space Pen on Apollo 7. I relied on it then, and it’s still the only pen I rely on here on Earth.” Click to purchase your Limited Edition Fisher Space Pen and Coin Set. 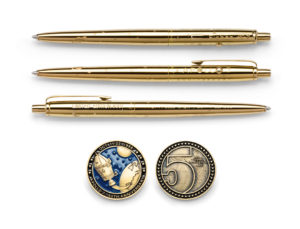 “We are extremely proud to be celebrating fifty years in space,” says Cary Fisher, President of Fisher Space Pen. “My father Paul Fisher was a visionary who personified American entrepreneurship and innovation. Our products are sold all over the world but we are still a family business manufacturing high-quality, state-of-the-art writing instruments, proudly Made in the USA.” 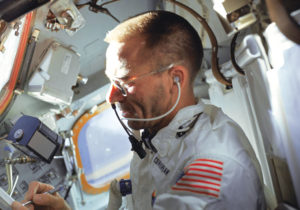 The Fisher Space Pen brand has become an iconic symbol of American technology and design. Its popular Bullet Space Pen is in the permanent collection of the New York Museum of Modern Art for its bold, futuristic look. Fisher Space Pen has also become part of American pop culture. It is not only used and enjoyed by millions around the world, it is also the subject of hundreds of fan videos and has been featured on several TV programs including an episode of the hit series “Seinfeld” entitled “The Pen.”

When manned space missions began, astronauts had a problem finding writing instruments. The ink in regular ball-point pens wouldn’t flow in zero gravity. Instead, Astronauts used pencils but the lead often broke and became a hazard floating in the capsule’s atmosphere. Paul C. Fisher, who was then president of the Fisher Pen Company and had been manufacturing ball- point pens since 1948, started thinking about how ordinary ballpoint pens would have trouble writing in space, but if a pen could be sealed and pressurized, it would keep the solvents from evaporating in the gravity-free vacuum of space

After spending over $1 million dollars of his own money and years of research, Fisher finally developed his patented pressurized ink cartridge that keeps solvents from evaporating and allows ink to flow in zero gravity. The Fisher Space Pen writes upside down, under water, in extreme temperatures from -30 to +250 degrees F (-35 to +121 Celsius), over almost any surface and three times longer than the average pen. Watch: “How It’s Made” video.

Paul Fisher sent samples of his prototype to Dr. Robert Gilruth, Director of the Houston Space Center. The prototypes were thoroughly tested by NASA and passed all tests. NASA astronauts began using the Fisher AG-7 Anti-Gravity Space Pen aboard the Apollo 7 Mission and Fisher Space Pen has been used on all manned space flights since, including NASA’s Space Shuttle Program missions, the Mir Space Station and the International Space Station as well as the Russian and Chinese space programs.